The Relationship Between Animal Abuse and Domestic Violence In recent North Carolina news, a dog named Huey was brutally killed by one of his owners, a veteran with PTSD and the veteran’s boyfriend, who is currently on active duty in the military, according to The Fayetteville Observer. The couple shot the family dog 10 times, which they filmed each other doing. A friend later posted the video to Facebook, hoping that the two would face criminal charges for their actions. The dog was the emotional support animal of the woman who shot him, Marinna Rollins. The dog’s other owner, who was temporarily letting Rollins take care of the dog, is Rollins’ former husband, who asked that his and his estranged wife’s last names not be used out of fear of death threats from enraged social media users. Rollins and her boyfriend, who took part in the shooting, are out of jail on $25,000 bail. But what does this tragic story have to do with domestic violence? According to the Human Society of the United States, there is a strong correlation between domestic violence, or any violence against another human, and animal cruelty. A study by the Chicago Police Department found that 65 percent of those arrested for animal abuse crimes had also been arrested for battery of a human. When animal cruelty happens at home, the next victim could likely be the perpetrator’s partner, children, or other household relatives. Often, the abuse happens simultaneously.

Researching the Link Between Animal Abuse and Domestic Violence

A “gold standard” study confirmed that pet abuse is one of four predictors of domestic violence. Additionally, the abuser may use pet abuse or threat of pet abuse to control their victim partner or spouse. A study found that in 71 to 83 percent of cases where women used domestic violence shelters, the abuser had also killed or abused the family pet. Likewise, another study found that in 88 percent of child abuse situations, the family pet was also abused. Evidence that abuse is happening in your home may stem from pet abuse or animal cruelty convictions of the abuser, because chances are that if you are a victim of domestic violence, your dog or cat most likely is too.

The Pet and Women Safety Act (PAWS) is designed to expand domestic violence protection laws to pets and to create a federal grant program for safe shelters. Bill S.322/H.R.909, if it becomes law, would also make it easier and more realistic for victims of domestic violence to flee from their dangerous situation and not have to leave their abused pet behind.

Whether you, your pet, or your child has been physically abused by your partner, you need to take action at once. Call the authorities and an experienced Charlotte, North Carolina domestic violence attorney today. The lawyers at Powers Landreth PLLC have vast trial experience and will work tirelessly to win your case and see that justice is served. Call us at 704-342-4357 today. 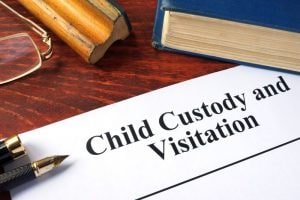 Custody and Visitation Rights of Non-Parents According to PBS, 2.7 million grandparents are currently raising their grandchildren. Non-parents, such as grandparents, uncles, aunts, siblings, or other relatives, may wish to become a larger part of a child’s life after their parents go through divorce, a parent leaves, dies, goes to prison, becomes abusive, can no longer properly care for the child, or disappears. Grandparents and other third-party relatives, as well as non-relatives, are sometimes granted joint or even sole custody of children. However, this is usually somewhat rare and can be difficult to accomplish if you are up against the child’s biological parents or parents.

In the Best Interest of the Child

As with all child custody decisions, the court will always choose in favor of the child’s best interests. However, the court is often biased with its decision-making, usually believing that, by default, the child’s biological parent or parents are the best choice for custody. Yet, a grandparent or other relative may be awarded visitation or custody rights in some circumstances in which that non-parent has a substantial relationship with the child. According to North Carolina code of laws § 50-13.2, a grandparent is defined as “a biological grandparent of a child adopted by a stepparent or a relative of the child where a substantial relationship exists between the grandparent and the child.” There is obviously quite a bit of wiggle room in determining what a substantial relationship is with such an ambiguous definition, which is why it is vital to work with an experienced and highly competent attorney.

When determining which party has the child’s best interests at heart and is most likely capable and probable of carrying out those interests, the following factors are looked at by the court:

Possible inexcusable factors, in the mind of the court, to allow custody to a biological parent over that of a grandparent or other close adult include the biological parent’s history or evidence of:

If you are a grandparent of the child, or another family member or non-family member, and you wish to have legal visitation rights or sole custody, it is important to discuss your options with an experienced Charlotte, North Carolina family law attorney. Call Powers Landreth PLLC at 704-342-4357 today.