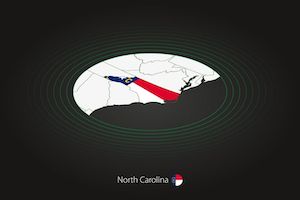 Grounds for divorce in North Carolina may require proof of:

North Carolina is generally considered “no fault divorce” jurisdiction. Fault or legal excuse need not be alleged as grounds for an absolute divorce.

The North Carolina divorce laws are such that obtaining a final divorce is not ordinarily a speedy process.

While a married couple ordinarily must be legally separated for a period of one year before a divorce may be granted by the Court, formal filing for separation is not required under the law.

** Divorces alleging incurable insanity, as well as filings as Divorce from Bed and Board, are now somewhat rare.

Where Should I File for Divorce?

At least one of the married partners must have the intention to remain separate and apart.

North Carolina will recognize an out-of-state divorce decree, if properly filed and it otherwise complies with the NC Divorce Laws.

Leaving the state to obtain a divorce, with the intent to circumvent the residency or jurisdictional requirements, can result in North Carolina not recognizing an out-of-state filing.

Can We Agree to Waive the Rules?

Some people try to get around the divorce laws in North Carolina, thinking they may do so by waiver, agreement, or consent.

Even if both parties to a marriage agree, the divorce laws are clear and purposeful.

Separation of marital assets, child custody, and support can take time to work through.

It is therefore important to follow the law, as the failure to do so may overly complicate the process and greatly increase the expense of getting divorced.

An all-too-common misconception is the assumption that legal separation applies only to the relationship and the intent of the parties to end the marriage.

Tips if You’re Considering a Divorce

Residency and physical domicile requirements can be somewhat complicated.

“It’s fair to say, living under the same roof may have substantial consequences to when you can file for divorce.”

An agreement to establish a formal date legal separation may have no legal effect if the parties continue to reside within the same household.

If the parties reconcile, even for a short period of time, that too can restart the clock regarding the period of separation.

Can We Get Divorced in Another State?

Jurisdiction of the Court is an important consideration in getting divorced.

Determining which state is the proper venue for divorce can be complicated, as states often have differing divorce laws.

Each state may have residency requirements regarding filing for divorce. If improperly filed, an action for divorce may be rejected possibly causing additional litigation.

“Efforts to circumvent the law cause problems. Running to another state to gain a tactical advantage or to avoid the requirements of filing for divorce in North Carolina carry consequences.”

If both you and your spouse intend to remain in North Carolina, considering it to be your home, it’s very likely a divorce granted in another country or state will not be deemed valid.

North Carolina takes the position that if it is the permanent, home state for both married parties, out-of-state divorces carry no legal effect.

The issue is not solved by declaring “temporary residence” status in another state.

The Court looks at background circumstances of the matter in determining the intent to permanently reside in North Carolina.

“The true intent of the parties is an important consideration. That applies too in establishing the formal date of legal separation.” The Powers Law Firm PA in Charlotte does not provide legal advice on immigration matters; but, our firm is more than willing to provide a referral when possible to a Charlotte immigration lawyer.

Given the domicile, residency, and jurisdictional requirements, timing and planning to get divorced in North Carolina can make the process easier.

“We advise clients, obviously when possible, to carefully consider and plan for a divorce.”

We truly believe each family law matter is unique.

Our goal is to provide compassionate guidance and legal advice, predicated on your individual needs and concerns.

Gathering information about getting divorced does not mean you have to follow through.

As such, what you tell us in consultation is strictly confidential.

Our Charlotte law firm answers questions, among other things, about Equitable Distribution, Alienation of Affections, Child Custody, and Support.

Family law matters include a consultation fee, retainers, and an hourly legal rate.